The name Anna Lee belonged to her late grandmother who passed away before she was born. Even though she never had the pleasure of meeting her grandmother, Anna lee from a very early age has always felt and told people that there is a little old lady with her, who she would often talk to.

When Anne Lee described this lady to her father, in her teenage years, he told her that it was his mother who passed away when he was just thirteen and that she used to read palms.  Anna Lee’s grandfather on her mother’s side was a Roman Gypsy, and that is where it is believed that Anna Lee got her psychic gifts, and talent for palmistry as it was widely used by gypsies. However, Anna Lee also feels that her father’s mother by her side offers help too. 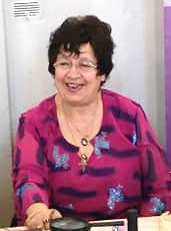 Anna Lee showed her first interest in palm reading at the early age of five, after receiving an injury to the centre of her hand, by trapping her hand in her younger brother’s pushchair. She watched it heal over time and noticed the lines in her palm and how they changed during the healing process. This fascination never left her, progressing to researching palmistry, but she was quick to realise that she could not seem to absorb the information from books but instead found over time she was reading palms instinctively, as it came very naturally to her.

This website uses cookies to improve your experience while you navigate through the website. Out of these cookies, the cookies that are categorized as necessary are stored on your browser as they are essential for the working of basic functionalities of the website. We also use third-party cookies that help us analyze and understand how you use this website. These cookies will be stored in your browser only with your consent. You also have the option to opt-out of these cookies. But opting out of some of these cookies may have an effect on your browsing experience.
Necessary Always Enabled
Necessary cookies are absolutely essential for the website to function properly. This category only includes cookies that ensures basic functionalities and security features of the website. These cookies do not store any personal information.
Non-necessary
Any cookies that may not be particularly necessary for the website to function and is used specifically to collect user personal data via analytics, ads, other embedded contents are termed as non-necessary cookies. It is mandatory to procure user consent prior to running these cookies on your website.
SAVE & ACCEPT